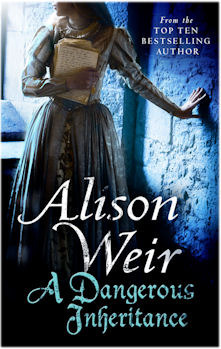 Game of Thrones has nothing on Tudor-era England when it comes to political intrigue.[[#fn.1][1]] In A Dangerous Inheritance (Hutchinson, 2012), Alison Weir fictionalizes the linked and somewhat parallel lives of Kate Plantagenet, the illegitimate daughter of King Richard III, and Lady Katherine Grey, a possible successor to Queen Elizabeth I. It's fiction, but Weir has hewed closely to the historical record, of which there is a surprising amount, at least for Katherine Grey. Kate's tale is somewhat more speculative, based on just a few a historical references, but the background of her story and the events in England at that time are closely based on what is know about the history.

Weir's structure is interesting, building on parallel events in the lives of the two women: marriage, love, pregnancy, and imprisonment. Separated by about a century, the author gives them a shared interest in the fate of two princes—possible rivals for the throne—in the time of Richard III. The questions of royal succession and the conflicts over it is a consistent them in the book.

The politics, power structure, and intrigues of the characters create a fascinating but confusing background. Much of the confusion comes from the history, especially from the many characters with similar names—there are several Richards, Elizabeths, and Johns, for example—as well as the different people holding the same title (say, the Duke of York) at different times. This is compounded by the English custom of referring to the people by first name, last name, or title. The names are not the fault of the novelist, of course, but they do challenge the reader in keeping track of a vast array of secondary and tertiary characters, especially between two separate historical periods.

More than once I wanted to look up more historical detail about the England Weir describes, both to better understand the historical basis for her characters, and to fill in some of the gaps in my own knowledge of that time, especially the history that the characters clearly knew. As it turns out, her history is very well-researched, which was simply not clear to me at the beginning. Still, there is much I do not know of the time between the lives of the two women, especially since that period includes the reign of Henry VIII.

In an afterword, Weir gives details of what is known and not known about these two women and the events of their times, giving a welcome foundation for the historical context of the novel. Of course, this is a novel, not a history, and Weir succeeds in exploring her main characters and their lives in politically turbulent times.

Alison Weir has her own web site, naturally. A Dangerous Inheritance is available at your local library, Powell's, Barnes & Noble, Amazon, and has many reviews at Goodreads.

[[#fnr.1][1]] Of course, the similarities to English history for Game of Thrones are so obvious that we need not comment on them further.